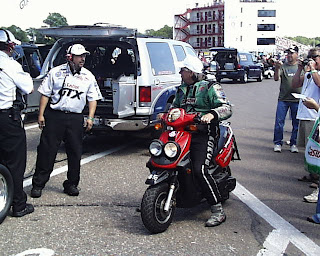 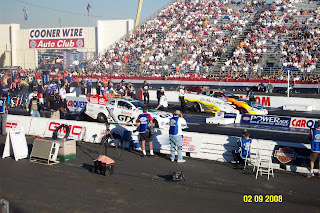 It just wouldn't be right not to write a blog about John Force Racing or Nitro cars in general. When we where out in California we stayed at the Fairfield Inn in Yorba Linda with the guys from the JFR camp. I had a chance to talk to one of the guys and man they are dedicated to succeeding in this sport. Even after putting Robert Hight's car in the winners circle and John and Ashley going all those rounds there was no pool party no party at all. He told me they would be back at the track testing in the morning on Monday.
I hope Ashley Force can get that first funny car win soon she has come so close and she sure has come a long way over the last year. As for John Force He is going for his 500th career start in Atlanta, whats next for that crazy hound dog? He sure likes to set the bar high.
On the flip side I was glad to see Fast Jack Beckmen, Tony Pedregon, Del Worsham and Tim Wilkerson get there wins. Tim has had so many number one starts but the wins just didn't come with them. Del has worked hard and has vary much earned his win and he doesn't have that multiple car team to get all that ever so needed data. We where at the race in Pomona when Tony's car blew to pieces and yet he comes back and wins at Gainesville WOW! As for Fast Jack I think he has what it takes to get that team a championship and he is a very friendly guy.
Its to bad you have to have a Favorite team because I think there are so many great people in drag racing. I guess my vote will stay with John Force because he works hard promoting drag racing and who else can talk that fast and get that much information into a 30 second interview. You have to feel sorry for the NASCAR fans they have no idea what a great group of friendly people we get to talk to at the track, from the stockers to the nitro pits. remember they don't get a pit pass with every ticket like we do.
Well I better stop blogging and get some stuff sold so we can go watch some racing.
Latter,
Troy